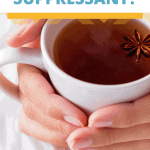 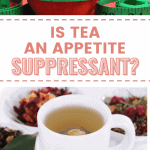 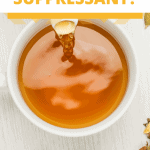 Tea is one of the world’s oldest drinks, originating thousands of years ago in China. Today, many types of tea are enjoyed the world over, and it continues to grow in popularity due to its rich taste and many health benefits.

One health benefit that those watching their figure might wonder about is whether tea is an appetite suppressant.

Many teas are thought to suppress appetite. This includes “true teas”—such as black, green, white, and oolong tea—and many herbal teas—such as chamomile, peppermint, ginseng, fennel, and ginger.

Let’s take a look at some of the most common appetite-suppressing teas available and how they help reduce appetite.

The following teas suppress your appetite and possess numerous other health benefits that can help with weight loss. We’ll separate them into so-called “true teas” and herbal teas. So if you are here because you want to know is tea good for weight loss, read on!

“True teas” are any tea made from the camellia sinensis plant—no other drink is technically tea. However, herbal drinks are generally accepted as being called tea by most people nowadays.

Why do we bring this up, you ask? Because “true teas” all share many of the same properties and weight loss benefits, just to varying degrees. These teas contain:

Although each of these teas comes from the same plant, their taste and chemical makeup are different; this is due to the process used to make each tea, with darker teas being allowed to oxidize more than lighter ones.

Let’s go deeper into the difference between the benefits of each “true tea.”

Black teas, which are made by allowing tea leaves to oxidize almost completely before baking and drying, contain the most caffeine. Caffeine is a potent appetite suppressant, but it can also lead to shakiness, irritability, and insomnia, so be careful not to overdo it.

Black teas also contain theaflavins, which are polyphenols that are currently being studied for their potential for helping with weight loss and numerous other health benefits, including anti-inflammatory properties.

Green tea has soared in popularity over the last decade or so due to its health benefits, including suppressing the appetite.

Green tea doesn’t contain theaflavins, but it has its own secret weapons in the fight against fat—powerful flavonoids called catechins. Catechins:

Green tea contains caffeine, although less than black tea does; this makes it a good alternative for those sensitive to stimulants but don’t want to give up caffeine altogether.

White teas, which are the closest to the unoxidized tea leaf in its natural state, contain very little caffeine and high levels of catechins.

Oolong tea is tea that’s been oxidized more than green tea, but not as much as black tea. It can range from one end of the tea oxidation spectrum to the other within those two teas, so its properties do the same.

You might have to try a few different oolongs before you find the right balance for you, but once you do, you’ll be glad you did.

Herbal teas can be made using flowers, fruit, leaves, seeds, or roots, rather than camellia sinensis. Since they can be made out of just about any edible plant, there are literally thousands of herbal teas.

We’ve combed through the most common herbal teas and chose the five that are the strongest appetite suppressants. As you probably already guessed, these teas offer many benefits in addition to reducing hunger pangs.

Chamomile is probably known best as a sleep aid and stress-relieving tea. These benefits are good on their own, but lack of sleep and high-stress levels are known to contribute to weight gain and retention, so its soothing properties can also help you shed pounds.

It’s probably no surprise that peppermint tea makes it onto this list since so many people drink it for its digestive-aiding properties. In addition to settling upset stomachs and reducing heartburn, peppermint can reduce food cravings. Peppermint tea has also been shown to:

Mint tea is also a good choice if you need a pick-me-up but don’t want to resort to caffeine.

Ginseng tea can help you suppress your appetite. It doesn’t contain caffeine, but it’s energizing nonetheless, with its strong licorice-like flavor, so is a good morning or pre-workout tea.

Ginseng is said to reverse memory loss and promote clear thinking, boost the immune system, and a ton of other health benefits. Drink ginseng tea, and you’ll improve your health in more ways than just losing weight.

Fennel is a popular appetite suppressant, in seed or tea form. This seed is common in Chinese and Indian cooking and is often used to reduce gas and bloating as well as aid with fat loss. Just make sure to drink extra fluids with fennel tea since it’s a diuretic!

Ginger has made the rounds in recent years as the new “miracle food” that’s supposed to solve your every problem. Unfortunately, ginger tea isn’t magic, but it sure is close. Ginger is known to:

This spicy tea is perfect as an energizing morning drink or as an alternative to your evening cocktail to wind down.

Before Using Tea as an Appetite Suppressant

Although tea is just about the most natural form of appetite suppressant you can get, drinking it for weight loss isn’t without its potential pitfalls.

If you’re drinking tea to lose weight, it’s a good idea to drink it straight, with no milk or sugar. The calories in a cup of tea are minimal, but drinking beverages with added sugar and calories is a surefire way to gain weight even though you’re not eating as much.

A Little Goes a Long Way

Another thing to keep in mind is that with tea, as with everything that has to do with dieting, a little goes a long way.

Using tea to suppress your appetite to last a little longer between meals or prevent snacking from boredom is a healthy way to maintain or even lose weight.

But drinking endless cups of tea instead of eating when your body is actually craving nutrients is not only unhealthy, but it will lead to rebound eating later, which will, of course, make you gain weight—the opposite of what you’re trying to do.

It’s also worth pointing out that all “true teas” have caffeine, so go easy on them later in the day or if you have caffeine sensitivities.

Final Thoughts:  Tea Can Be an Effective Appetite Suppressant

There’s nothing more relaxing after a stressful day than curling up with a cup of hot tea. And if you’re trying to lose or maintain weight, you can really relax, knowing that this indulgence is actually helping you eat less and achieve your goals.

If you love tea as much as I do, pin this to your favorite tea-loving Pinterest board and pass it on for others to enjoy! Pinkies up!