Many people on a gluten-free diet know that black, white, and green teas are gluten-free, but what about “Truly Tea” tea-flavored hard seltzers? Hard seltzers can also sometimes be a gluten-free option, but the additives in many pre-mixed cocktails can still contain gluten.

Truly Tea is a gluten-free tea-flavored hard seltzer that is safe for celiacs and those on a gluten-free diet to drink. Though it comes in several different fruit tea flavors, this brand of seltzer doesn’t have any ingredients that contain or are prepared with gluten.

“Truly Tea” is a safe option for people who are trying to eat gluten-free, but there are other iced tea hard seltzer options that can also be a safe and delicious choice. Keep reading to learn more about what makes “Truly Tea” gluten-free and what other gluten-free bubbly drink options are available on the market for people with health problems.

How Is Truly Tea Made?

The process of making “Truly Tea” is what makes this product gluten-free.

While other alcohols are fermented by using grains like oats, hops, rye, and barley, “Truly Tea” is a hard seltzer that is fermented using pure natural cane sugar.

This is in contrast to other popular hard seltzer brands like White Claw. Some White Claw hard seltzer is produced using cane sugar, which is safe for those who are gluten-free. Others, such as those produced in Canada, can be produced with fermented alcohol from malted grains.

While many White Claw varieties are also safe for gluten-free diets, all “Truly Tea” varieties are advertised as being gluten-free products. This status makes them a sure bet if you’re trying to stock an alcohol bar or fridge for celiacs.

What Kind of Alcohol Is In Truly Tea?

In many hard seltzer brands, sugar fermentation is preferred to malt fermentation because it makes the beverage naturally gluten-free and it is also a less complicated chemical process than fermenting barley.

In “Truly Tea”, alcohol is produced by fermenting cane sugar.

Is There Tea in “Truly Tea”?

The tea used in “Truly Tea” is black tea, which means that it is naturally gluten-free.

What Flavors Does “Truly Tea” Hard Seltzer Come In?

“Truly Tea” hard seltzers come in four different natural flavors. You can buy each variety of flavors on their own or opt for an iced tea mix pack with several cans of each flavor.

All flavors of “Truly Tea” seltzers are considered gluten-free and safe for celiacs and those with non-celiac gluten sensitivity. “Truly Tea” hard seltzers can be garnished with fruit syrups or cut fruit for additional flavor.

Along with these hard seltzers being a practical choice for celiacs, there are several other advantages for drinkers of “Truly Tea.”

Hard seltzers like “Truly Tea” might be gluten-free, but that’s not the only benefit of choosing them over more traditional alcoholic drinks. They’re ideal if you’re trying to watch your waistline and your sugar intake, too.

According to the nutrition facts label the ingredient list consists of:

There are many different kinds of teas across the world.

Some of them are gluten-free, and some are not. If you’re talking about tea made from dried tea leaves, you’ll be happy to learn that all forms of dried tea are gluten-free. This includes black tea, green tea, and white tea.

While all teas made from dried tea plant leaves are gluten-free, things start to get tricky once you venture into fruit-based or herbal teas. Some of these teas are gluten-free and some aren’t, so if you’re following a strict gluten-free diet you’ll want to check the backgrounds and labels on these products carefully before drinking.

Gluten-free tea drinks are a good option for people who have gluten intolerance or a gluten allergy. In severe cases, this allergy is known as celiac disease. Celiac disease can cause damage to the gastrointestinal system if gluten is consumed, interfering with the absorption of nutrition.

One of the things that will prevent you from drinking glutinous alcoholic beverages is gluten intolerance.

In mild cases, gluten intolerance can exhibit itself in the following symptoms: 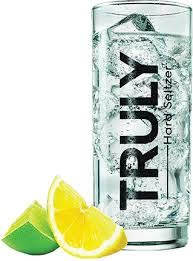 In celiac disease, the more severe form of gluten intolerance, the symptoms that crop up after eating gluten are more dangerous.

Symptoms of celiac disease include the following:

Teas That Help With Gluten Intolerance

Other than “Truly Tea” seltzers, other varieties of tea can be helpful for those on a gluten-free diet, as well as those who have general problems with chronic bowel irritability or inflammation.

Here are some alternative teas that you can drink to help cope with a gluten-free lifestyle:

Even though some teas should be avoided by those with gluten intolerance, there are still plenty of fruit flavor tea-based drinks that celiacs can safely consume. Some of them are even supportive of gluten intolerance by fighting bodily inflammation and relieving gluten-related pain.

“Truly Tea” Is a Safe Bet for Celiacs

Celiacs who are looking for a way to drink light alcoholic beverages alongside their beer-drinking friends have a ton of delicious flavors if they try Truly. Truly Tea hard seltzers are brewed with real tea, allowing drinkers to take in the tea’s nutritional benefits while they have a good time. It’s the perfect drink for a hot day with no gluten and only 1 grams of sugar.