Genmaicha is a variety of green tea mixed with roasted, puffed brown rice grains. Genmaicha is popular as a meal replacement tea and for those who are undergoing religious fasts, like Buddhist monks. Genmaicha tea is sometimes dusted with matcha dust to give it a more prominent umami flavor and green hue.

If you’ve never tried it, genmaicha has a unique nutty flavor you won’t find in any other green tea variety. Read on to learn more about the origins of genmaicha and how to try this iconic Japanese brew for yourself.

Even though genmaicha is now one of the most popular teas across all demographics in Japan, this green tea mixed with puffed roasted rice kernals was originally created for poorer Japanese people in medieval Japan.

The puffed brown rice kernels in the green tea was used to stretch the green tea leaves, allowing it to last longer after the tea harvest and cost less than other types of green tea.

Genmaicha is usually made from bancha tea, but gyokuro genmaicha and sencha genmaicha made with sencha leaves is also available.

Also called brown rice tea and popcorn tea, this Japanese tea with the sweet flavor and nutty taste is definitely one to try.

Is Genmaicha the Same as Matcha?

Genmaicha is different from matcha because of toasted rice, which gives it a different aroma, flavor, and appearance. Matcha green tea powder is sometimes added to genmaicha tea by dusting it over the whole tea leaves and toasted rice.  This popular blend is called matcha-iri genmaicha and is widely available in tea shops and in online stores. 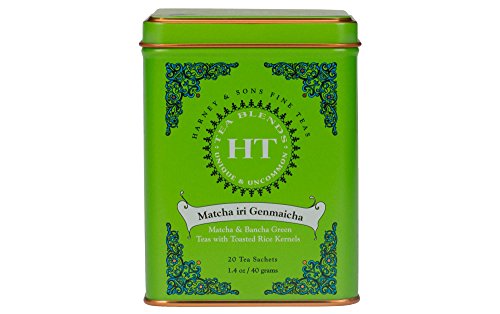 Genmaicha green tea is a healthy alternative to other sweetened hot beverages such as coffee and cocoa. The benefits above are a good reason to try adding genmaicha into your tea routine.

Side Effects of Genmaicha

While genmaicha shares the health benefits associated with green tea, it also shares some of the potential negative side effects, too. Here are a few issues you might run into when drinking green tea like genmaicha:

The negative side effects associated with green tea are not common, and they’re usually mild if they do occur. If you notice any negative symptoms after drinking green tea such as shortness of breath, hives, or strong nausea, cease drinking the tea immediately and consult a physician.

One of the most intriguing things about genmaicha is that it has a distinctly different flavor than other types of green tea. This is because of the addition of toasted and puffed white rice grains.

The roasting process of the toasted rice gives this earthy tea a nutty, full-bodied flavor very different from other green tea types. It also has a bright yellow hue compared to the more greenish liquor of other green teas.

According to Master Class, Matcha powder is sometimes added to genmaicha tea blends to give it a stronger green coloring. It is also added because it adds a more prominent umami note to the tea, deepening its flavor profile.

Is Genmaicha Popular in Japan?

Genmaicha is popular in Japan across all members of Japanese society, but this tea originally gained its popularity as a meal stretcher for the poor masses. Genmaicha was commonly consumed in medieval Japan to fast when food was scarce. Genmaicha was also used as a way to help stretch tea rations to last longer during cold winter months.

Due to its delicious flavor, genmaicha tea is now enjoyed by people all over Japan and the rest of the world. Like many other peasant foods in global cuisine, genmaicha is appreciated by people of every class for its simple, comforting flavor.

Like all true teas from the camellia sinesis plant, this green tea with roasted brown rice has caffeine. The caffeine levels are about the same as those of regular green tea, or about 25 mg of caffeine per 8 ounce cup. This is significantly less caffeine than the amount in a cup of black coffee, which has about 95 mg of caffeine.

So, if coffee gives you the jitters, have a cup of organic genmaicha tea instead.

How to Make Genmaicha

Although this tea is based on green tea, the recommended way to brew this tea is different: the water should be at about 80–85 °C (176–185 °F), and a brewing time of 3–5 minutes is recommended, depending on desired strength.

Although genmaicha is a type of green tea, there are slightly different guidelines in the proper way to brew it.  Here’s how to brew a pot of genmaicha using loose leaf tea:

If you’re in a rush, you can always use good quality genmaicha tea bags.  Just use water at lower temperatures (between 175° and 185° F), with a steeping time of 2-3 minutes.

What are Some Other Names for Genmaicha?

In Korea, it’s known as “brown rice tea” or Hyeonmi-cha.

Genmaicha Is a Unique Japanese Treat

If you’ve never tried genmaicha tea before, this tea is the next variety you should add to your tea cubby. With a nutty, toasted flavor perfect for cold mornings, it might become your new favorite green tea.

Want to Save this What is Genmaicha post to read later?  Pin it to your favorite Pinterest board and pass it on!