If you’re looking for an herbal tea that can boost your immune system while also boosting your iron levels, a smart option to look at is Greek mountain tea.

With its numerous health benefits, Greek mountain tea is consumed as part of the Mediterranean diet as a way to enhance health and prevent a wide variety of illnesses.

Greek mountain tea is made from the dried flowers, stems, and leaves of the ironwort plant, a herbaceous plant native to the Greek mountains in the Mediterranean region.

Its scientific name is sideritis scardica. Interestingly, the plant gets its name from the Greek word for iron, sideros. Some say that’s because the ancient Greeks used the herb to heal wounds caused by iron weapons sustained in battle. Others feel the plant was named after its spear-shaped sepal.

The first mentions of the Sideritis genus in Greek writings date back to ancient times. Greek herbalists have long known the healing effect of the plant and have used it as a preventative measure and a treatment for mild illnesses for thousands of years.

Other Names for Greek Mountain Tea

This herbal tea is also known by several other names:

Greek mountain tea was used for centuries before any scientific study was made of its botanical makeup. As a matter of fact, Hippocrates, widely considered the father of modern medicine, recommended Greek mountain tea as a health aid as far back as the 5th century BC.

In recent years, this plant has been studied (in both clinical trials and animal studies) and shown to have several tangible medicinal benefits if consumed regularly. These are some of the known health benefits of drinking Greek mountain tea:

The botanical compounds contained in Greek mountain tea are associated with reduced oxidative stress and inflammation in the body. Studies have shown that Greek mountain tea is just as healthful as green tea when it comes to powerful antioxidants.

This can help with digestive illnesses like stomach ulcers and colitis. These chemicals can also reduce the inflammation associated with impaired respiratory systems.

A 2012 animal study by Planta Medica showed that a daily dose of Sideritis scardica extract decreased inflammation of the gastrointestinal tract and reduced the severity of gastric ulcers in rate.

The active ingredients in Greek mountain tea have been used to treat respiratory problems for hundreds of years. These can help bolster the body’s immune system and help treat mild illnesses such as the common cold and flu.

Studies in mice showed that ironwort extracts may be a promising, potent treatment for cognitive impairment in the elderly.

The Greeks may have started drinking Greek mountain tea based on observation of its powers. However, their use of the tea was eventually justified by the discovery of very real scientific benefits in the plant.

Does Greek Mountain Tea have caffeine?

Greek mountain tea is known for having an earthy taste and floral notes that are slightly sweet. This combination of flavors ends up tasting similar to a blend of citrus, mint, and chamomile tea.

Because it has a similar flavor profile, dried Sideritis pairs well with citrus, mint, and chamomile tea blends. It can also be mixed with black, green, and white tea.

How Often Should You Drink Greek Mountain Tea?

Since Greek mountain tea has no known side effects, it is safe to drink as much of this herbal tea as you like.

Folk wisdom encourages pregnant women to consume Greek mountain tea, and it is not associated with any known birth defects.

However, since there are few studies geared specifically toward studying Sideritis, caution should be taken when ingesting any herbal tea during pregnancy. Do not drink Greek mountain tea or any other herbal remedy without consulting a physician first if you’re pregnant or may become pregnant.

Where to Buy Greek Mountain Tea

Greek mountain tea can be purchased locally in many areas of Greece, but for those who don’t live in the region, it can also be found in online markets internationally. 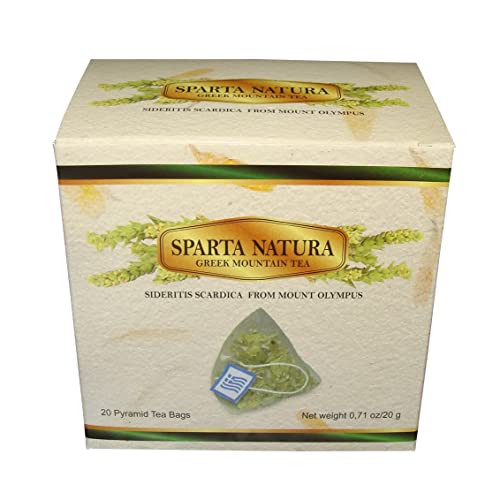 It is available as dried loose tea or in tea bags in health food stores, online, and in some specialty grocery stores.

Can Greek Mountain Tea Be Grown at Home?

For those that want to source their own organic Greek mountain tea, ironwort is a hardy plant that is easy to grow across several climate zones. So you don’t have to live in the high elevations of Greece to reap the benefits of the most popular Greek herbs.

This valuable herb prefers lots of direct sun and a rocky, well-draining soil.

After harvest, gather the plant into bundles with twine and hang the herbs up to dry in a dark, well-ventilated place for two to three weeks.

Once dried, the leaves, flowers, and stems of the Sideritis plant can be crushed or chopped up and used for tea.

How to Make Greek Mountain Tea 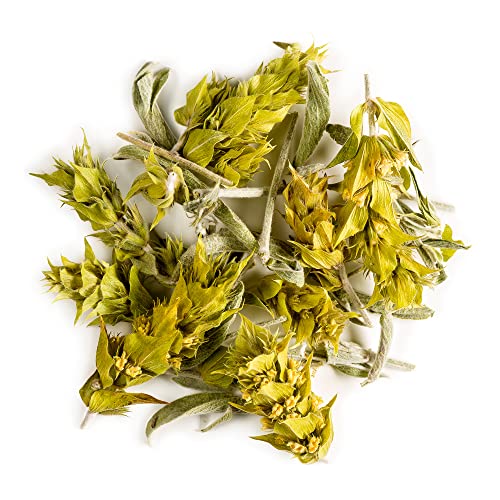 How to Serve Greek Mountain Tea

Greek mountain tea is best served hot with a spoonful of honey or a lemon slice. It also makes a great iced tea when flavored with a bit of honey and lemon.

Even though Greek mountain tea isn’t as well-known as herbal teas like mint or chamomile, this native Greek plant can act as a versatile herbal remedy.

This easy-growing plant is one of the most underrated tea herbs you can grow in your home garden and is a great, healthy addition to your daily routine. Since it contains no caffeine, it’s a healthful drink you can enjoy any time of the day.