Purslane, also known as little hogweed, is a common yard plant used in purslane tea. Like other herbal teas, purslane tea is simple to prepare, but it can offer many health benefits to those who drink it.

Purslane tea is a tisane made from chopped purslane leaves and boiling water. Purslane tea contains cancer-fighting antioxidants and a variety of potent vitamins and nutrients. Purslane can be foraged, grown in the backyard garden, or purchased commercially in dried form to make tea.

If you’ve never tried purslane tea before, you might be surprised at the advantages you’ll gain by drinking it. Read on to learn more about purslane tea and how to prepare it at home.

What Is Purslane Tea?

Even if you don’t know what purslane is, chances are you’ve seen it in your yard or neighborhood. Purslane (also called little hogweed, pursley, and Portulaca oleracea) is a common herbal succulent found throughout the world. Purslane has been used as a nutritious dietary supplement in human diets for thousands of years.

Purslane tea is a tisane, or a steeped liquor created by placing plant matter in boiling water until its essential oils and nutrients are transferred to the water. This water is then consumed for its nutritional benefits. Purslane is also commonly added to salads as a vegetable green since it has a similar flavor to spinach.

Purslane has been prized throughout history as a nutritious foraged food, but it also has many health benefits when it is consumed as part of an herbal tea. Here are some of the healthful properties associated with consuming purslane :

As you can see, purslane contains enough essential vitamins and nutrients to be considered a superfood. This nutritional quality makes it very beneficial in tea form. However, there are some people who should not ingest purslane tea.

Along with essential nutrients, purslane also contains a large amount of oxalates. Oxalates are chemical compounds associated with the formation of kidney stones. People susceptible to kidney stones should avoid purslane and all other teas high in oxalates, such as black tea.

How to Prepare Purslane Tea

Preparing purslane tea isn’t difficult to do even if you’ve never made it before. To prepare purslane tea, perform the following:

If growing your own purslane is too much trouble, it’s also available as a dried herb and in purslane tea bags from health food stores and online retailers. 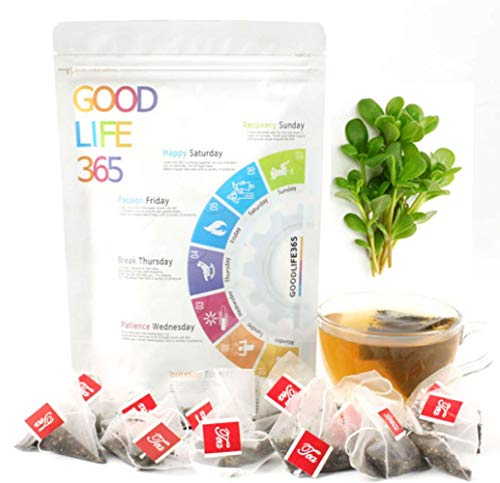 Can You Grow Purslane for Tea?

Purslane is also something that grows naturally in many parts of the world. If you haven’t weeded your garden in a while you just might find some growing there!

Purslane Is an Herbal Tea Powerhouse

For an ancient tea herb that packs a ton of nutrition in a small package, it doesn’t get much better than purslane. Easy to cultivate at home and a versatile source of vitamins and minerals, purslane tea is one of the most nutritious drinks you can make with plants right out of your own backyard.